After I had read two very interesting articles about Swedish behaviour, I felt like adding my own personal comment about it.

The first article I stumbled upon was published on The Local website with this title: “We Never Had a Single Conversation with a Swede”. It says it all. I discovered it thanks to my two fellow-bloggers The Dippylomat esq.and Nkosazana. In this article, we get to follow the not-so-nice adventures of a British family with an Indian background in Stockholm. They thought it would be very exciting to discover a Scandinavian city that has such a good reputation and influence on the World economy. How disappointed and sad they were! Nobody acknowledged them when they tried to break the ice. The only people who were naturally friendly and with whom they conversed were immigrants!

Here is an excerpt:

We Never Had a Single Conversation with a Swede:

“In fact, aside from in a professional setting, we never had a single conversation with a Swede.
This is a matter of great sadness to us. It seemed to us that the Swedes seem were using the Swedish language as a barrier to discourage exchange, even though most speak excellent English.[…] Many Swedes were off hand, cold, and very few acknowledged us”

Let me tell you my own experience from last week. I had the greatest pleasure of receiving my younger cousin and his girlfriend who momentarily studies in Oslo. On Sunday we went to Skansen, because we wanted to show them the green side of Stockholm. It was a wonderful day, cold but sunny. When we were inside the park, a woman suddenly bumped into my guest Marie from behind and passed away without excusing herself. Marie was a little chocked and I told her…”Don´t be surprised, it happens all the time here, people walk on your feet, hit you with their bags in the tube, never hold the door…and never say I´m sorry”… They pretend not seeing you.  But I guess it is not only a Swedish quality, same thing in Oslo.

After a two-hour walk in the park, we went to the restaurant Solliden to enjoy a genuine Swedish Julbord i.e the traditional Christmas dinner.

Now, I´ll make a little digression. For those who have never had a Julbord, you ought to know that Christmas food is exactly the same as Eastern or Midsummer food. It looks the same, tastes the same; only it is served in much fancier plates. But basically you eat everything that Swedish cuisine has to offer: cooked and dried ham with sweet mustard, different kinds of marinated herrings, cooked potatoes, potato sallad, strömming (fried sill), and pancakes with whipped cream for desert and much more. It is not my favourite meal, but we thought it would be nice for our guests to taste typical Swedish food and enjoy real Swedish holidays. 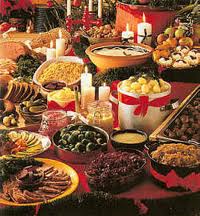 Back to my story. When it was our turn to help ourselves, I went to the buffet and looked for mustard marinated herring, but I could not find it despite all the written notes with the names of the dishes. So I stood there quite a long time not knowing what to choose and after a few minutes I could feel someone´s presence very close to me. A very old and tall man leaning on his crutches. He was just there waiting for me to pick something. I looked at the man with a timid smile and asked him:

–       Do you think this is mustard marinated herring?

–       No!, he answered with a mean and aggressive tone and looked at me with his icy glance. 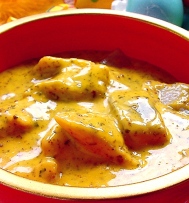 I was so stunned by his rudeness that I stayed freeze. Paralysed! I slipped away like a frightened mouse and felt like an idiot. It is only when I came home that I realised what a bastard he was. Then I felt really really angry. Could not get over it and had to discuss it again with my man who suddenly handed me an chronicle from the Sunday edition of Dagens Nyheter (4 dec 2011) by Hanna Mellin. The title of her chronicle? Den oartiga generationen (the Impolite Generation). She had interviewed the etiquette expert in Sweden, Magdalena Ribbing who said that people stopped being polite after 1968 and that the baby-boom generation was the rudest, that their fight for freedom and equality led to this kind of sans-gêne attitude.

When I think of that old chap, it is not his age I focus on, but just on the fact that he was so mean. I wish I had answered back something like “ Thank you for your kind help!” or “Merry Christmas!” I need to train on my tit for tat responding.

Local´s article We Never Had a Single Conversation with a Swede : http://www.thelocal.se/article.php?ID=35404#