Lenovo - the new owner of the Motorola brand - is aiming the Moto G4 Plus at the budget end of the Android market, but it's a couple of rungs up the ladder from the entry-level Moto G4 Play.

Considering there's a 5.5-inch 1080p screen, a Qualcomm Snapdragon 617 with 2GB of RAM, a 3,000mAh battery, a 16MP camera, and almost stock Android Nougat, the Moto G4 Plus looks a very impressive smartphone for its low price tag.

While Lenovo doesn't seem to have messed with the Moto brand it has indulged in a confusing three-way split, giving us the Moto G4 Play, the Moto G4, and the Moto G4 Plus. 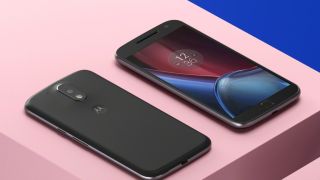 The thing is, the Plus part of the name probably doesn't mean what you think it does. It has exactly the same 5.5-inch 1080p display as its cheaper sibling, and most of the internal specs, including the processor, are identical.

All that's different is the enhanced 16MP camera with a pro mode and a combination of laser and phase detect autofocus, plus the addition of a fingerprint sensor.

Is that really enough to justify the price bump? Let's take a closer look.

Update: The Moto G4 Plus is still one of the most well-rounded smartphones you can purchase if you're on a budget or otherwise. However, the Moto G5 Plus and, if you're interested in photography and a more premium design, the Moto G5S Plus are both better choices.

But if you're not ready to take the leap, don't fret. Android Oreo is confirmed to be coming to this phone later in the year, which is great news for those who are looking for a cheaper phone, or want to stick with this one for a while longer.

If you're interested in the best cheap phones available, this is one of the best, though the competition is heating up with entries like the LG Q6.

Thing is, it's in the UK, making the G4 Plus looking like an even better bet - on paper at least.

We've come a long way from the original, chubby Moto G, but the G4 Plus is still unmistakably related. It's like the first-generation Moto G has been put in a press, shaving a few millimetres off its girth and stretching the screen by an inch.

This is an unashamedly plastic smartphone with a large, 5.5-inch display. There's a tough, smoothly curved plastic frame around the glass front. The speaker at the top has a subtle metallic highlight around it and there's a raised, small, square fingerprint sensor at the bottom.

The textured power button and the volume rocker are on the right spine. There's a Micro USB port on the bottom edge and a standard 3.5mm audio jack up top.

Flip it over and you'll find a lightly textured, removable plastic back, a lozenge-shaped camera lens and flash with the same metallic highlight as the speaker, and the dimpled Moto logo.

There's a gap at the bottom, so you can prize the back off with a thumbnail. You'll find a microSD card slot and a SIM card slot inside, but the battery isn't removable. The G4 Plus takes a microSIM card, but there's also a handy frame so you can slot a nanoSIM in there instead.

There's nothing glaringly ugly about the design, but if you had to pick a single word to describe it, then "dull" would be in the running.

My review unit has the 'Dark Moon' frame, which you might more reasonably describe as grey, and the pitch black back with metallic highlights in silver.

If you order directly from the Motorola website, you can use Moto Maker to customize your G4 Plus and inject a little more colour. You can even get the back engraved for an extra fiver. However, this is never going to be the kind of eye-catching beauty that draws admiring glances when you slip it out of your pocket.

One of the first things you'll notice when you pick up the G4 Plus is that it's surprisingly big. At 155g it's not too heavy, but it is a bit bulky. To give you an idea, the profile matches the Samsung Galaxy Note 5, which puts the G4 Plus firmly in phablet territory.

As screen sizes have grown, the distinction between phablets and smartphones has been eroded, but this is still going to be an uncomfortably large phone to handle for people with smaller hands.

I'm used to the Note 5, and I'm also over six feet tall with big hands, and yet I found the G4 Plus a little awkward to handle – it doesn't help that it's still quite thick at 9.8mm, and the curved sides are smooth and slippery.

At first glance the Moto G4 Plus and the Moto G4 are identical. The only external difference is the square fingerprint sensor at the bottom of the screen, and since this is a major selling point for the G4 Plus I'll delve into it in detail in the next section.

Before we move on, I have to mention the 5.5-inch display. It has a Full HD resolution of 1920 x 1080 pixels. Many of the latest flagships exceed that, giving you incredible pixel per inch clarity, but 1080p is often enough.

The display on the G4 Plus is really crisp, colours look vibrant, and the only time you might bemoan the fact that it's not Super AMOLED, like the Galaxy S7, is when you're trying to view it on a bright day outdoors.

One final thing to note about the design of the G4 Plus is that it doesn't boast the IP67 rating of its predecessor. It can deal with splashes and dust, but don't take it for a dip.