"We're not releasing this to make money," Leap CEO Michael Buckwald said of the VR Developer Mount, "but to solve a problem that a lot of developers run into -- which is a consistent way to use the leap with VR." Buckwald says that VR projects using leap vary in application: some mount the device on headgear, others place it on a nearby table. It creates a kind of chaos, an inconsistent experience across Leap-supported VR projects. By introducing a standardized mount, Buckwald hopes to make all Leap-based VR consistent. To help facilitate this, the company is pushing a massive update to its beta SDK, enabling native top-down tracking and giving developers direct access to the Leap sensor's raw image. 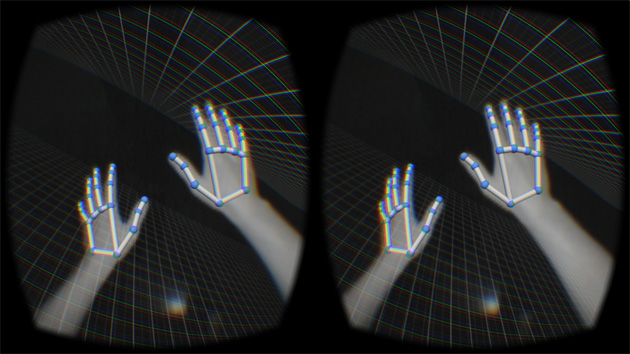 I dropped by the company's San Francisco office to see what this looked like, and was surprised to find myself looking at the world in black and white. The current generation Leap Motion devices is powered by infrared cameras -- hardware that allows it to track human limbs in a dark room, but strips the image of color and fine detail. Wearing a Leap-equipped Oculus Rift is a lot like stereoscopic wearing night-vision goggles. While this experience is novel in its own right, the experience came to life when I looked at my hands: rather than seeing a virtual representation of my digits rendered on a computer, I was looking at my actual fingers, overlaid with a skeletal wireframe. It's the same software that powers Leap's V2 motion tracking, but the overlay of reality flipped a switch -- it was instantly clear that I was now in a virtual space that had the same human input paradigm as normal reality. The software demo itself contained very little (just a collection of floating objects that wafted around in reaction to my waving arms), but the potential was obvious.

Still, the novelty of the infrared image would make a poor augmented reality experience, which is why Leap is looking to the future: a new motion sensor it calls Dragonfly. Dragonfly is similar to it existing sensor, but outfitted with high definition RGB / infrared combo cameras. Buckwald strapped me into a prototype unit, and the difference was immediately apparent: the new sensor had the same ten finger tracking, first person hand tracking, but now in full color. 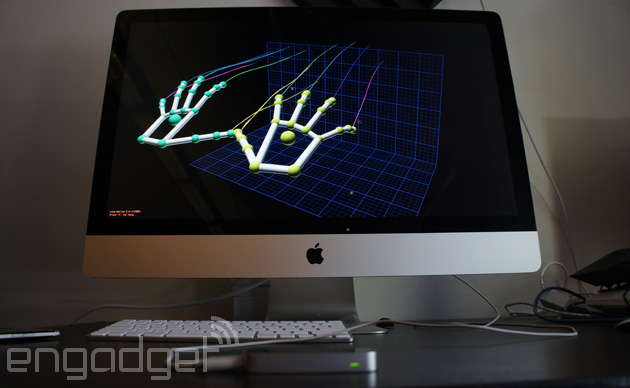 That sensor too, has tons of potential, but you won't be able to buy one. "This is not something we're selling," Buckwald explains, "but something we're demoing to OEMs to embed in VR devices." It's not a product itself, but a potential part of a future product. The CEO wouldn't say who the sensor is being shopped around to, but we wouldn't rule out the obvious parties - a best case scenario for leap would see this technology embedded in the consumer versions of the Oculus Rift, Project Morpheus or both. That vision, however, is still ways off; for now the company is focusing on getting the current hardware's VR Developer Mount in the hands of content creators. Interested in creating some first-person, hand tracking VR? Leap says the kit will be available started today on its online store for $20.