When a couple decides to divorce, one of them typically moves out. In North Carolina, that’s a requirement. You must live apart, separated, for one full year before you can even file for divorce.

But many North Carolina residents have also heard that if you move out, you can be sued for abandoning the marriage. While that’s vague enough to not make much sense, it also sounds bad, which is why so many people ask about it during our divorce workshop.

The short answer is no, but there is more to it than that.

What is Abandonment?
Abandonment is not just moving out; it’s defined as moving out with the intention of leaving the marriage along with refusal to provide support and to be part of responsibilities such as caring for children. It is not the same as leaving for fear of physical safety. Some partners can make a person’s life so awful they must leave; this is called “constructive abandonment” and can include factors such as alcohol and drug abuse and domestic violence.

Abandonment and Divorce
Abandoning the marriage is not an issue in deciding divorce itself. In some states, divorce is decided as no-fault, meaning a couple does not need to list or cite a reason to get a divorce. North Carolina is a hybrid state. You can get an absolute divorce with no one listed at fault, and spouses do not need to prove fault in order to get divorced. Instead, a court may use fault (such as an affair) when awarding alimony. 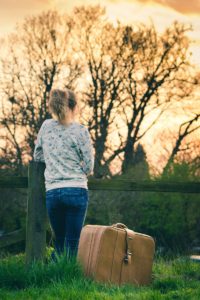 Custody Cases
Abandonment may become a factor during custody discussions. When one partner leaves, the children typically stay with the partner who remains in the home. This creates a status quo, which by default names the parent who stays as the custodial parent. When later asking for custody, a judge may see that arrangement as working and not want to disrupt it.

The best course of action is to speak to an attorney before either partner leaves. Each spouse and his or her attorney can work out a co-parenting agreement. Divorcing partners often turn to mediation to help in this process.

Once an agreement is reached, one spouse can leave knowing his/her involvement with children will not be affected later.

Alimony
Abandonment is also sometimes a factor in alimony awards. If both spouses are employed and make similar incomes, this is not a large factor. But if one spouse opposes the divorce, things get trickier. The partner who moves out against the other’s wishes may have trouble later asking for temporary or permanent spousal support. However, a lot of this depends on your specific situation. Most attorneys recommend you remain in the home until some of these details can be worked out.

Safety and Well Being
One partner may feel pressured to leave for his or her physical safety or psychological well being. A divorcing couple that is fighting has trouble living together, and it can impact the children. In those cases, separation is obviously a good solution. Be sure to speak to an attorney if you need to move out as soon as possible. However, in the event that you leave out of genuine concern for your physical safety, a judge will not hold it against you.

This blog post is intended to be used for informational purposes only and should not be considered legal advice. To speak to an attorney about your situation, visit our monthly divorce workshop.